An asymmetrical abstract game
for two players in just 9 moves.
Inspired by The Art of War. 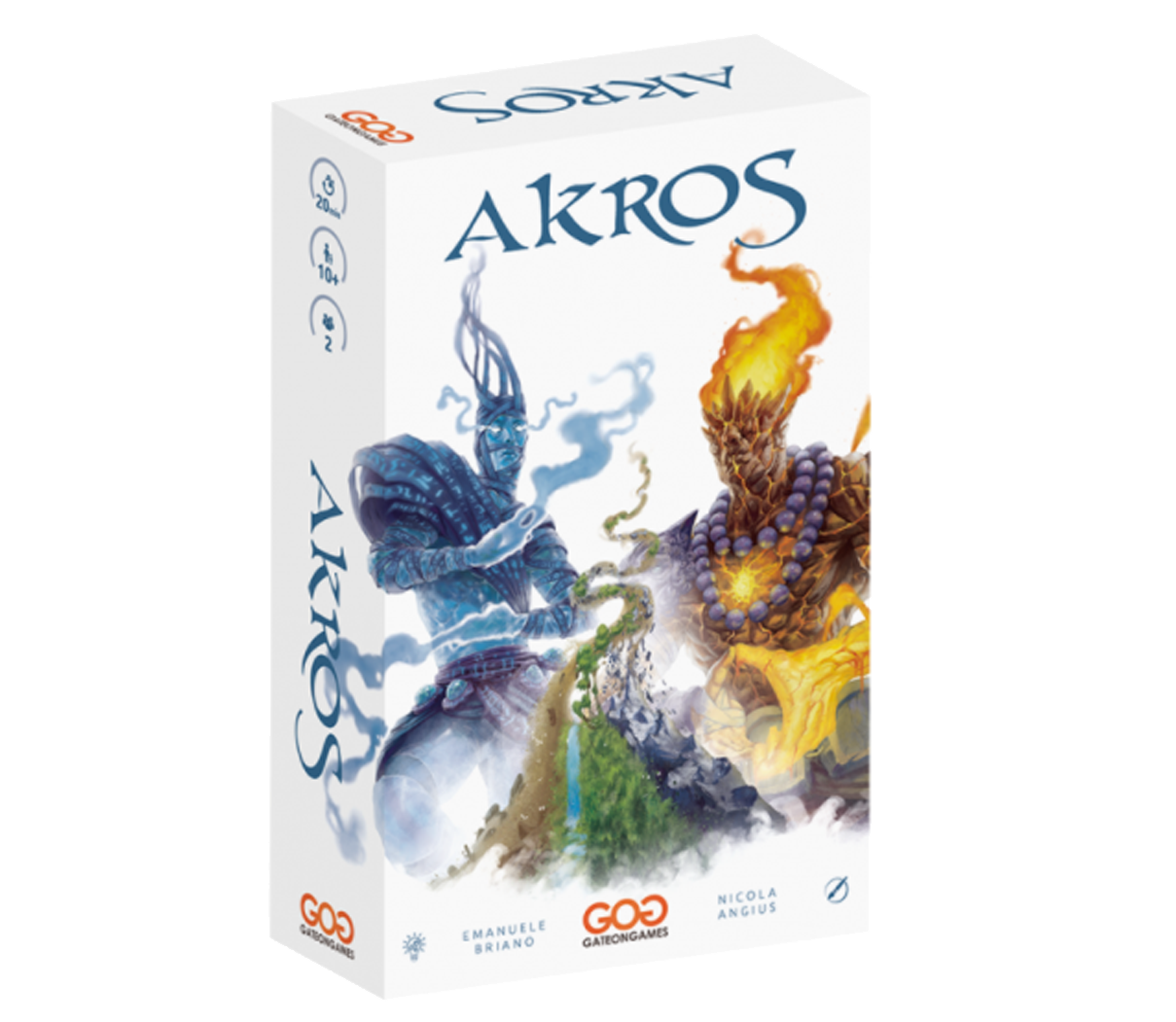 Akros is an asymmetrical abstract game of majorities and area control that will plunge you into a breathtaking challenge for two players. You will play as titanic creatures during the genesis of a new world. By using your elemental servants you’ll shape the scenery of a small new world to gain control of its various regions, stacking astonishing 3d hexagon tiles on top of each other.

You fight to control the highest hills created during the game, to obtain the dominion over the majority of the three environment types.

Balance your effort on each envoronment type wisely and adapt your strategy frequently to claim the merit of creation.

It all started with my passion for abstract games and elegance. For a long time I have seen many potential players of abstract games scared by two common factors. First, the time duration of an abstract game, especially of a tense one. Second, the lack of interest in the game once one of the two players took enough advantage to seal the victory.

I have started thinking of a game that offers the mood of a medidative abstract game in just few moves, and with a tension that lasts until the last move.

In that period, I was reading Sun Tzu's "The Art of War", a book that I found extremely inspiring. Especially, I found some intruiguing concepts that could match an abstract game perfectly:

"Supreme excellence consists in breaking the enemy’s resistance without fighting."

"According as circumstances are favorable, one should modify one’s plans."

"Attack him where he is unprepared, appear where you are not expected."

"All armies prefer high ground to low and sunny places to dark."

From those inspirations, it came to my mind an idea of a battle over different type of terrains growing as hills. Warriors would battle to occupy them to show their superiority over the enemy without fighting.

I added some input alea, and designed the moves of the two armies. One, strong and slow; the other, weaker but attacking and disappearing using its knowledge of the battle ground. I started to feel I had something good.

I was ready to build a good looking prototype. Being my first abstract, I wanted something cool. Wooden tiles, warm colors, and special materials for the two armies.

I went for stone cubes for the slow strong ones, and for cork cones for the light army moving fast. I let you judge the result, but I loved it.

A long period of playtesting started, with the help of my wonderful friends and playtesters at the association Atlantide. I had a the great feeling at seeing them wanting to explore the game further, play again, and again, trying the two factions, discussing strategies, enjoying the battle at the pub or at home.

I needed a publisher.

I also developed an alternative theme for the game: the Batracomiomachia. The battle of Rats and Frogs made famous by Homer (famous doesn't equal pop), with 3d miniatures of rats conquering tiles and frogs jumping fast.

Finally, during Lucca Comics and Games, I met Mario Cortese and GateOnGames. We had an instant understanding! I can remember his encouraging words about me and my games ("Where have you been till now?"). I also remember some players passing by and wanting to play that game, with Mario having to tell them it was just a protoype. That was fun and really motivating.

Some months passed, and we signed the contract. Akros was a reality. GateOnGames playtested it in depth and suggested some changes. That's the way I love to work with publisher: an open connection, frequent talks, feedback on their ideas for the product and faith in my job.

From that moment on, as it is normal, the designer is no more in charge of the project. The publisher contacts factories, searches for an illustrator, decides the box.
Mario was wonderful at informing me at every choice and update, more than a publisher is supposed to do. That was great, because it made me feel connected with my creature in all the phases.

Also, they took care of the marketing plan, production, shipping and everything else, and now we are ready to start selling it.

Fingers crossed for the sales, but I especially look forward to hear comments and see photos of people having fun through it, anywhere.

In a meditative mood.

You can support Akros and me.
That's very appreciated.

Buy a copy for you
or your friends.

Where to buy it 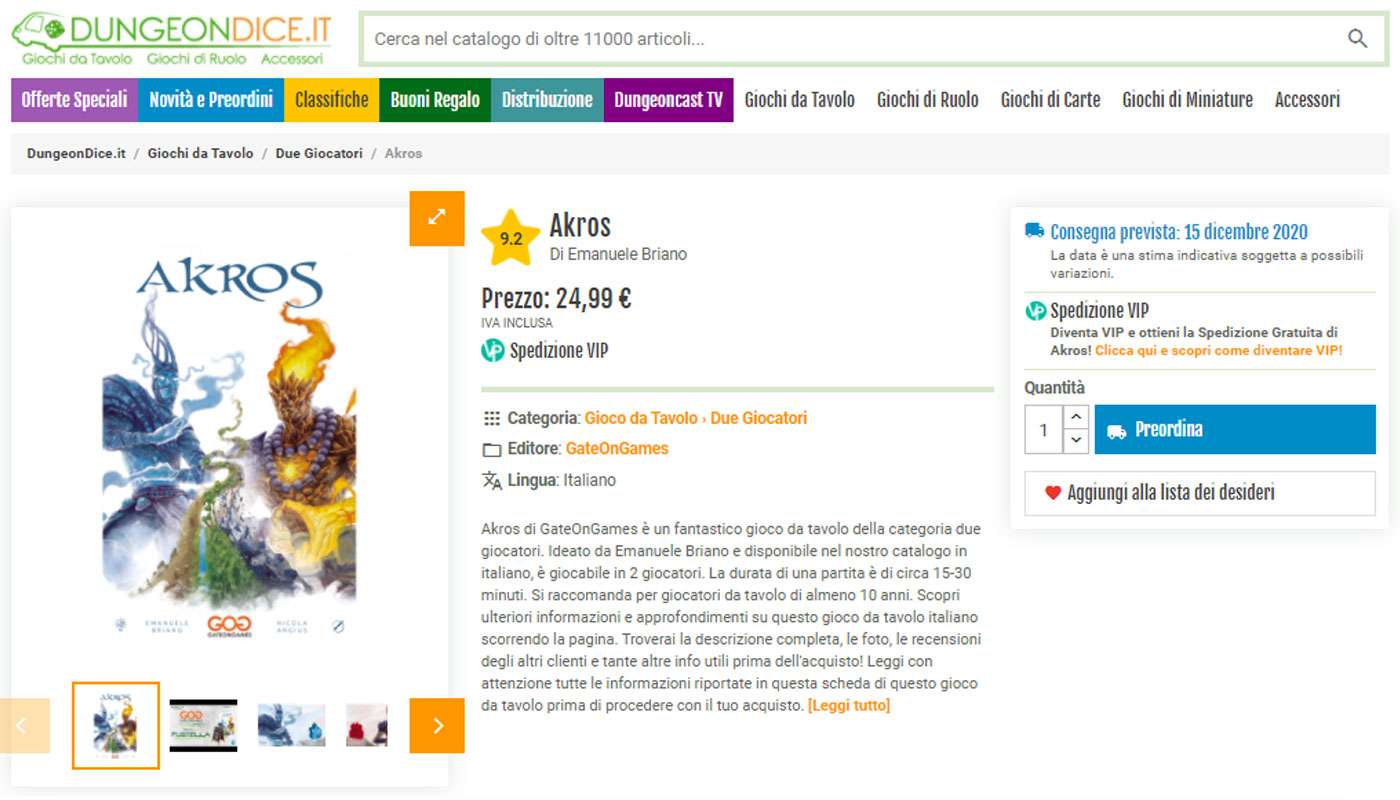